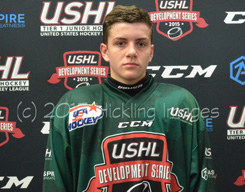 Evan Orr is from Macomb Township a suburb northeast of Detroit. Evan started playing hockey almost as soon as he could walk. With a strong drive to advance his skills and move up to the next level, Rolston Hockey Academy seemed like a natural fit for him. He is now able to manage his hockey schedule without neglecting his schoolwork.

Evan is considered one of the most polished offensive defenseman in his age group. He has played with the Little Caesars Bantam Major AAA hockey club U14 and U16. Most recently, he committed to joining the Michigan Tech Huskies.